Lent and the Anglican Tradition of Prayer

In the Anglican Tradition, Lent is a time to examine many things in one’s life, but, in particular, one’s prayer life. Prayer has always been central in Anglican piety. In his homily entitled, Sermon Concerning Prayer, Archbishop of Canterbury Thomas Cranmer (creator of our Prayer Book!), said this about prayer, 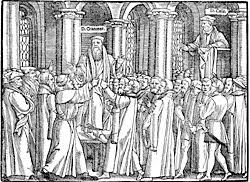 There is nothing in all man’s life (well-beloved in our Saviour Christ) so needful to be spoken of, and daily to be called upon, as hearty, zealous, and devout prayer, the necessity whereof is so great, that without it nothing may be well obtained at God’s hand.

We learn three things about prayer in Cranmer’s statement. First, prayer is central to the Christian life. As Cranmer says, there is noting in all man’s life … so needful to be spoken of … . It’s central because without it, says Cranmer, nothing may be obtained at God’s hand. This makes sense because the Christian life is primarily about living in an ongoing relationship with God in Christ. Unless you engage God in prayer, which is basically listening and responding to God, there can be no such relationship. Second, we are daily to be called upon to engage God in prayer. As in any human relationship where regular communication is necessary for it to be healthy, so too in our relationship with God must we communicate in prayer daily with our Lord. Lastly, the way we pray is as important as that we pray. Cranmer encourages us to prayer in a way that is hearty, zealous and devout. By this statement Cranmer does not mean we have to somehow ‘feel’ God’s presence if prayer is to be effective. There are plenty of examples in the bible of people who have no sense of God’s presence when they are praying. Instead, it’s important we attend carefully to first, to what God is saying to us, and second what we’re saying to Him in our prayers.

What can we do so that prayer is central in our lives, done so daily, and in an attentive way? Cranmer knew that we cannot do this on our own. I’m sure many of you, like me, have found it hard to want to pray, let alone do so regularly and attentively. That is why in Anglicanism, one’s prayer life is rooted in ‘common prayer’. Consider what Cranmer wrote in one of the prefaces of the BCP about ‘common prayer’,

All Priests and Deacons, unless prevented by sickness or other urgent cause, are to say daily Morning and Evening Prayer either privately, or openly in the Church. In the latter case it is desirable that the bell should be rung, in order that the people may come to take part in the service, or at least may lift up their hearts to God in the midst of their occupations. (BCP, p. Ivi)

Cranmer believed the prayer life of the Christian was never meant to be an ‘individualistic’ exercise, but instead, a communal one. That may sound odd to your modern, Protestant ears that prides itself that everyone can approach God on an individual basis. Yet, this view of prayer is a recent, modern development in Anglican thinking. Let me be clear. I’m not saying it’s the Anglican tradition that prayer can only happen with others, although it’s a good idea. But we are encouraged by our Anglican Tradition, when we cannot pray with others to do so with the same ‘common prayers’ of the Church. Why?

Praying communally (or, at least in a common way), is first, based in Scripture. It was the common practice of Judaism in biblical times to organize one’s day according to fixed times in the Synagogue, that Jesus Himself practiced. Furthermore, there is evidence in the bible the first Christians followed the same practice of gathering together in one place to pray at fixed times in a day. Common prayer is also rooted in Church Tradition. As early as the 2nd and 3rd centuries monastic communities prayed at fixed hours (following St. Paul’s dictum to pray unceasingly), and this practice continued well into Medieval Christianity. Granted, this practice was endeavoured primarily by monastics and often in Latin. Yet, when the Reformation came, common prayer was maintained for both clergy and laity. In the Anglican case, Cranmer took the historic Seven Offices of Prayer used by the monastics, combined them with Medieval and Eastern Christian traditions of prayer and compressed them into two service, Morning and Evening Prayer written in a common language so everyone could participate. Therefore, both praying together, or when alone, the same ‘common prayers’ is firmly rooted in both Scripture and Church Tradition.

Common Prayer was very important to Cranmer because he believed, the rule of prayer is the rule of life (Lex Orandi Lex Credendi). For Anglicans, the way we pray determines what we believe. Anglican tradition, dogma, and practice flows from prayer, even as prayer flows from dogma and practice. That is why Anglicanism is shaped by what we commonly pray in our liturgies (and this once was just the BCP, although some believe it should remain so for theological reasons), rather than a confession of faith such as in Presbyterianism. In other words, common prayer is mean to shape what we think, our desires, what we do, and thus who we are as followers of Jesus Christ.

It’s not just the prayers or liturgy of the Prayer Book that does this. The Book of Common Prayer is rooted in and points us to the bible. If you follow the daily practice of praying the offices of Morning and Evening prayer, along with it’s lectionary, you will hear or read all the Psalms once a month and the whole bible in a year. In the early days of Anglicanism, communities across Britain would gather in their local Churches for Morning and Evening Prayer every day to pray and hear Scripture read. Communities gathered to hear the reading of Scripture every day because few people could read.

Fast forward to today. Unfortunately, the practice of offering a regular Morning and Evening Prayer service in Anglican Churches no longer takes place. Even the service of Evensong on Sunday evenings has dissipated. Times have changed. People lead busy lives and we’re no longer a Christian society. But that doesn’t mean you can’t take advantage of and let the common prayers of the BCP direct, guide and shape your personal prayer life. In fact, I highly recommend you do. Why? First, it’s easy. Often, we give up on prayer because we’re frustrated with having to decide what we should pray let alone wanting to pray. The Prayer Book does this work for us. It doesn’t necessary help us feel like praying. Yet, if we don’t have to create our own prayers it’s more likely we will do so even when we don’t feel like it. Second, the Prayer Book makes sure our prayer life is first about God, not us. Prayer is fundamentally about responding to the God who first speaks to us. Of course, He does this in our reading of Scripture and that is why the BCP lectionary has us read so much of it. Still, it can be hard to know what God is saying to us in Scripture. That’s where the ‘common prayers’ come in. The Church’s prayers summarize what the bible says about who God is, what He’s done for us in the death and resurrection of Jesus, and the sort of life He’s calling us to live. In this way, we can be sure we are listening and directing our prayers to the right God, not a God of our imaginations. That does not mean we should never pray using own words to God. Yet, when you use the common prayers of the Prayer Book in your prayer life on a regular basis, you will find when you do pray with your own words they will be rich, thoughtful, well ordered and, most importantly, enable you to experience deeply the living God.

So, I encourage you to buy a Prayer Book, or find it online and commit yourself to praying the offices of Morning and Evening Prayer throughout the weeks of Lent. It may seem wooden at first and the language awkward. But, give it time. It will grow on you.

Lent and the Anglican Tradition of Prayer